Pauliina Ståhlberg, the Director of the Finnish Institute, invited us to the Institute’s new premises in King’s Cross for a talk on the current state of Finnish Cinema. As an added bonus for members, the event coincided with a 10 year retrospective exhibition of shoes by the Finnish designer Julia Lundsten.

Dr Tony Lurcock introduced the third and final volume of his selections from the writings of British travellers to Finland entitled “A Life of Extremes”: the British discover modern Finland 1917-1941. Among the 30 or so visitors to Finland in this volume were Arthur Ransome, Noel Coward, Harold Macmillan and Lady Diana Cooper as well as important figures in the history of the Society such as Henry Bell, Alexander MacCallum Scott and Bill Mead.

Inauguration of New Finnish Reference Library at the Church

We joined forces with the London Finnish Art Group for an evening at the Finnish Church in London when the new Ambassador, H. E. Ms Päivi Luostarinen, officially opened the Art Group’s 25th anniversary exhibition and the new Reference Library at the Church, which has been made possible by donations of books by past and present members of the Society. 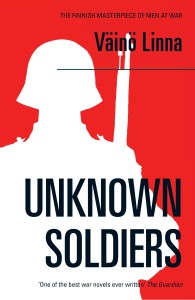 We liaised with the Embassy and the Finnish Church to launch the new translation by Liesl Yamaguchi at a special event at the Finnish Church on Sunday 17 May, which is Kaatuneiden Muistopäivä, Finnish Remembrance Sunday. The Ambassador spoke about the seminal importance of the book to Finnish public consciousness and understanding of the War and Dr Terry Charman, Senior Historian at the Imperial War Museum, gave a short talk placing Unknown Soldiers in its historical context of the Continuation War. We ordered 60 copies of the book and they were all sold. 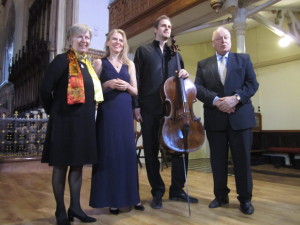 The Ambassador and Mrs Huhtaniemi with Laura Mikkola and Tuomas Ylinen

Following the success of last year’s concert, we arranged another afternoon concert at St Mark’s Church, Hamilton Terrace. The concert was be given by Laura Mikkola, piano, and Tuomas Ylinen.The programme was Einojuhani Rautavaara
Cantus Arcticus, Concerto for Birds and Orchestra in the piano arrangement by Peter Lönnqvist; Beethoven Sonata for Cello and Piano No 3 in A Major, op.69; Sibelius Malinconia for Cello and Piano op.20 in D Minor and Brahms Sonata for Cello and Piano in E Minor, op.38
The Ambassador and Mrs Huhtaniemi attended the concert, which we promoted in part to thank them for the enormous support they have given the Society, and other organisations in the UK connected with Finland, during their time in London. The concert was generously supported by Suomi Seura, SEB and the Embassy of Finland.

Our AGM was held with the kind permission of the European Commission Representation in London at their premises, Europe House, in Smith Square, London SW1. Presentations were made to the outgoing President, Justin Staples and the outgoing Hon Treasurer, Ron Akhurst and members were introduced to the new President, Sir Paul Lever. After the formal business of the meeting, Edward Clark, President of the UK Sibelius Society, gave a very interesting talk on Sibelius as a European composer. The evening ended with wine and sandwiches.

There was a full house at the Ambassador’s Residence when André Noël Chaker, a French Canadian who has lived in Finland for 20 years, gave a talk to the Society together with members of the Finnish-British Chamber of Commerce. His bestselling book, The Finnish Miracle deals with the subject of Finnishness and success. The basic thesis is that there is a set of original national values and ways of doing things that have given Finland a competitive advantage in developing an enviable level of peace and sustainable prosperity. The lively presentation was followed by wine and canapes.

The King of Karelia

Dr Nick Baron, Associate Professor of History at the University of Nottingham, gave a talk entitled “The King of Karelia” about Col. P J Woods and the British Intervention in North Russia 1918-19. In his book of the same title, Dr Baron wrote an account of the life of Col. Woods and edited his Karelian Diary. It was a fascinating talk, beautifully delivered, and a subject well-worth being better known.

The Extarordinary General Meeting was called with a view to approving a new set of rules for the Society to modernise them, to make them consistent with the possible future registration of the Society as a charity (as is the case with the Anglo-Scandinavian societies) and to make the procedures for appointing officers and members to the Council more democratic and transparent. In the event several members were critical of the new draft rules and in the circumstances it was inappropriate to vote on the draft that had been circulated to members.

Following the EGM, there was a showing of the film Kekkonen tulee!. We are grateful to Solar Films for allowing us to show the film.