“Finish Off with Finland” a Miscellany

Fourth and final volume in a series documenting Anglo-Finnish
relations and acclaimed in the TLS as ‘a fascinating prism through
which to view modern Finland’
For over two centuries, Finland has been inspiring, delighting,
baffling, and terrifying British visitors and writers. This volume
collects a remarkable array of Finnish–British encounters and
adventures in both countries – including the perils of Finnish
horses in the nineteenth century and Finnish drivers in the
twentieth, Sibelius’ and Mannerheim’s repeated visits to England,
several daunting (and sometimes life-threatening) crossings of the
border with Russia, the challenges of dentistry in the wilds of 1950s
Lapland, and the inevitably awkward collisions of traditional British
sensibilities with traditional Finnish sauna culture.
Several accounts are included from British visitors who lived and
worked for months or years in Finland, providing deeper and more
nuanced observations of periods ranging from the tense, austere
postwar years to the turn of the millennium.
The long historical perspective shows how experiences and
perceptions have changed – or, sometimes, persisted – on perennial
themes such as Finnish education, the Kalevala, and the sauna. A
selection of English poems about Finland completes the collection.
Previous titles by Tony Lurcock on Anglo-Finnish relations, covering the
periods 1760–1830, 1830–1917 and 1917–1941:
Not So Barren or Uncultivated (CBe, 2010; 9780956107329)
No ParticularHurry (CBe, 2013; 9780956735997)
A Life of Extremes (CBe, 2015; 9781909585157)
‘Impeccably researched, written in an accessible, lively and lucid style, this is a
gem of a book which will delight the scholar and the general reader alike’
– Mara Kalnins, Notes and Queries
‘At once both an anthology of extracts from British travel accounts and a rich
mini-encyclopaedia of personalities, routes and destinations’
– Rainer Knapas, Books from Finland 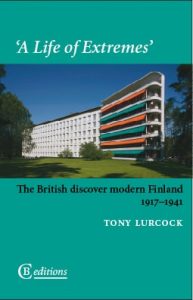 The third volume in Tony Lurcock’s series of compilations of British eye-witness accounts of Finland from the mid-18th century.

After nearly five centuries as a Swedish province, and more than century as a Grand Duchy of Russia, Finland was finally able to declare independence in 1917. It rapidly established its place in the world, becoming known especially through its athletes, its architecture, and the music of Sibelius.

Following the Bolshevik revolution a British squadron was established in the Gulf of Finland, and British agents risked and sometimes lost their lives crossing between Finland and Russia. Within a few years, though, tourists were acclaiming Helsinki as ‘one of the most modern and up-to-date cities in Europe’, but also discovering traditional ways of life in almost every part of the country. Other visitors interested themselves in aspects of ‘Finland the Pioneer Republic’, admiring its social cohesion, the political system, the schools and the hospitals. They photographed the stadium being got ready for the 1940 Olympics, but the Soviet invasion of Finland at the end of 1939 and the ensuing Winter War brought British war correspondents rather than spectators.

Passages from the writing of more than thirty British travellers are linked and introduced by Tony Lurcock’s usual informed and entertaining commentary. Among those included in this volume – alongside spies, journalists, anglers, foot-sloggers, schoolchildren and volunteer ambulance drivers – are Arthur Ransome, Noël Coward and Harold Macmillan. 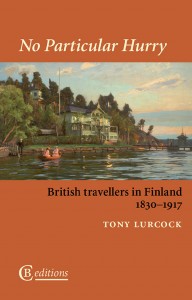 The nineteenth century saw the beginning of tourism to Finland. Travelling was no longer a survival trek: the railway network was spreading, and steamers operated on the larger lakes. Visitors marvelled at the glories of the scenery, the comfort of travel, the excellence of Finnish education, and in particular at the remarkable independence of Finnish women. Travelling sometimes without escorts, English women recorded many things which escaped the notice of most male travellers.

But not all visitors came for peaceful purposes. Because Finland was a Grand Duchy of Russia, the Russian War of 1854–5 brought the British fleet into the Baltic, and sailors and marines wrote of their often surprising experiences. From the end of the century nearly all British writers showed concern for Finland in its prolonged struggles against ‘Russification’.

Selected passages from the accounts of nearly thirty travellers, together with Lurcock’s informed and entertaining commentary, chart the varied responses of British writers to the making of modern Finland up to 1917, the year of independence.

Tony Lurcock grew up in Kent, and studied English at University College, Oxford. He became lecturer in English at Helsinki University, and subsequently at Åbo Akademi. Returning to Oxford, he completed a D.Phil. thesis, and taught there, and in America, until his recent retirement. He is the author of numerous review articles, mainly on eighteenth-century literature and on biography.

Not So Barren or Uncultivated: British travellers in Finland 1760–1830 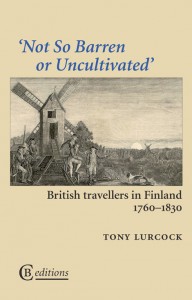 ‘This fascinating survey of the British in Finland’ – Paul Binding, Times Literary Supplement

‘Impeccably researched, written in an accessible, lively and lucid style, this is a gem of a book which will delight the scholar and the general reader alike’ – Mara Kalnins, Notes and Queries

‘At once both an anthology of extracts from British travel accounts and a rich mini-encyclopaedia of personalities, routes and destinations’ – Rainer Knapas, Books from Finland