This was probably the most ambitious event that the Society has ever organised. Edward Westermarck was one of the founders of the Society and in his lifetime was known internationally as a pioneer of social anthropology. There were lectures by academics from Finland, Britain and America and the event was attended by about 90 people. With the co-operation of the University of London, we obtained planning consent for a plaque in memory of Westermarck to be erected on the site of a house where Westermarck had once lived when he was teaching at the LSE. In deference to the vagaries of December weather, the plaque was unveiled in Chancellor’s Hall by Mrs Liisa Huhtaniemi flanked by the Ambassador, Mr Pekka Huhtaniemi, and the Vice-Chancellor of the University of London, Prof. Geoffrey Crossick before being installed on the north elevation of the south block Senate House. Approaching Senate House from the entrance in Russell Square, the plaque is on the left hand side.

The Westermarck Conference would not have been possible without the help on the academic side of Prof. Tim Ingold of the University of Aberdeen, Åbo Akademi University and the Westermarck Society nor without the generous financial assistance from Svenska Kulturfonden, Stiftelsen för Åbo Akademi and the Alfred Kordelin Foundation. The co-operation and practical support of the University of London and the Embassy of Finland must also be acknowledged and the extraordinary drive and effort of Marjatta Bell. The proceedings were recorded and are expected to be published in the autumn of 2013. 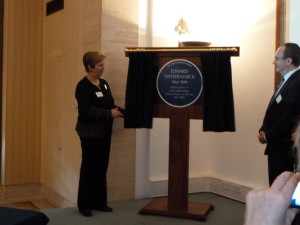 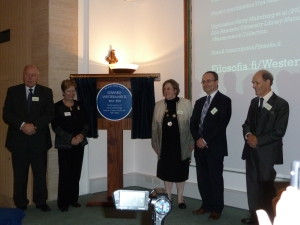 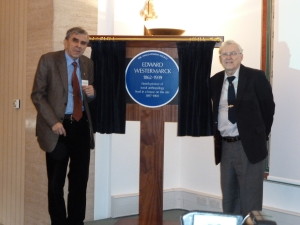 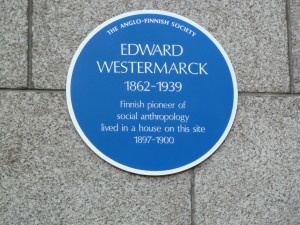 The plaque installed on Senate House

Visit to the British Library

We were privileged to have a tour of the British Library led by Barbara Hawes, the Curator of the Scandinavian collections. In addition to a tour of the Library itself we had an opportunity to see some of the treasures of the Finnish collection, including early printed Bibles, first editions of the Kalevala and other classics of Finnish literature from Alexis Kivi to Tove Jansson.

In October we arranged three film evenings at the Finnish Church and tried to publicise them as widely as possible to other Finnish organisations. The films we showed were Miesten vuoro, Mitä meistä tuli and Lupaus. We are grateful to the Lotta Svärd Foundation and others for allowing us to show the films without having to pay any performance fees.

Our centenary celebrations started with a Reception hosted by the Ambassador at the Residence to which he generously invited representatives of all the other organisations in the UK connected with Finland. To mark the centenary, Bill Mead had written a history of the Society which was launched at the Reception. Sales of the history at the Reception raised almost £600. It is appropriate to record our thanks to Bill, not just for the labour of writing the book but also to recognise all that he has done for the Society is reviving it after the War and in the half century and more since then. 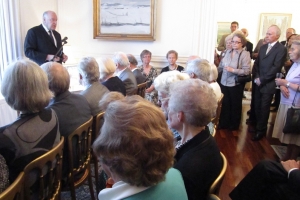 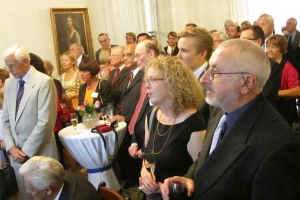 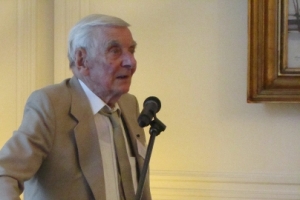 Extraordinary General Meeting and Buffet Dinner at the Finnish Church

The EGM was convened to approve an increase in the level of the subscription and to agree to the creation of a class of corporate membership. Arna Davis said a few words about the tradition of celebrating Flora Day and we enjoyed a buffet dinner prepared by the staff at the Church.

The Art of Translation

We enjoyed a fascinating talk by Kersti Juva, who is one of the most distinguished and prolific translators on English literature into Finnish ranging from novels by Sterne, Dickens, Tolkien and A A Milne and plays by Shakespeare, Wilde and Stephen Berkhoff. She illustrated her talk with a number of striking images to illustrate that often words do not mean the same thing from one language or culture to another – for example “winter” for people living in England was illustrated by a leafless oak tree in a hedgerow but the image of a spruce tree laden by snow represented “talvi” for Finns.

AGM and Reception at the University Women’s Club

Thirty eight members attended the AGM and enjoyed a convivial reception in the comfortable surroundings of the University Women’s Club.

Members had the opportunity to see the film Miesten vuoro – The Steam of Life, a multi-award winning documentary made by Joonas Berghäll and Mika Hotakainen which had been selected as the Finnish entry in the best foreign language film category at the Academy Awards.