The Sami Peoples of the North

Prof. Neil Kent spoke to us about his new book which is a comprehensive social and cultural history of the Sami people of the Nordic countries and north-western Russia. The event was intended also to be a launch of the book but, unfortunately publication was delayed and it is now not expected to appear until April 2014.

Mike Lawless, one of the founding directors of L.A. Architects in Lewes, gave us a talk about Alvar Aalto in which he considered not just the legacy of his buildings but the influence he had outside Finland and the character of the man himself, flawed as he may have been. With the generous permission of all entitled to the copyright, we were able to have a showing of the DVDs made of the community opera by Orlando Gough and Stephen Plaice which was inspired by the story of the Finnish soldiers captured at Bomarsund during the Crimean War, who were brought to Lewes and imprisoned there from October 1854 until June1856. The conductor of the performances given in Lewes in July 2007, John Hancorn, very kindly introduced the opera to us and  spoke of how the project was developed and Ron Akhurst read some extracts from contemporary press reports. The timing was very apposite as the refurbished Memorial had been rededicated in the presence of the Finnish and Russian Ambassadors only a couple of weeks earlier, on 28 September.

This event at the Royal Geographical Society was the first in recent memory to focus on the Anglo side of the Society’s remit. Caroline Millar introduced about thirty members of the Society (including a few guests) to the Discovering Britain project run by the RGS with the Institute of British Geographers. The aim is to devise 100 walks around Britain and to provide information about the historical events and processes which make the wide variety of landscapes to be found in the British Isles the way they are. The talk was illustrated by excellent photos and will surely have encouraged some of those present to embark on some of the walks.

Before Caroline Millar’s talk, the Librarian of the RGS, Eugene Rae, spoke to us about the history of the RGS and showed us some of the items in their collection relating to Finland: there were old maps, lantern slides, photos from the 1920’s, some of the most valuable published accounts of travel in Finland, such as those by Acerbi, Edward D Clarke and Joseph Marshall and also materials relating to the Finnish Arabist, Georg August Wallin (1811-1852) who was awarded the Founder’s Medal by the RGS in 1851. On display were the volumes of the RGS Journal in which reports of Wallin’s travels were published and also his original manuscript. Brief mention was also made of a second Finnish recipient of a Founder’s Medal medal from the RGS, Adolf Erik Nordenskiöld, awarded in 1869 for designing and carrying out the Swedish expeditions to Spitzbergen. 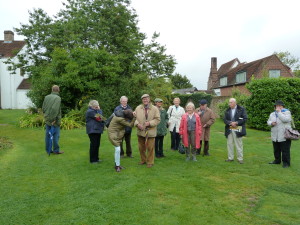 Members in the garden at Hoglands

Thirteen members of the Society made their way to the pretty village of Perry Green near Much Hadham in Hertfordshire to see the Moore Rodin Exhibition. We were guided by Paola Killinen. The weather was disappointingly overcast and there was the constant threat of rain, but not enough to dampen appreciation of the gardens in which the larger works were set. A Finnish connection was found: in the book about Henry Moore’s home and the art and other interesting objects which he collected from all over the world, there was a photograph of Moore with Marie-Louise and Gunnar Didrichsen. The Didrichsens acquired 13 works by Moore, the largest collection of his work in the Nordic countries. After the tour of Hoglands and the exhibition buildings and grounds the day ended with refreshments at the nearby Hoops Inn.

We were pleased to have the opportunity to meet about 15 members of the Aino Kallas Society and the Krohn Family Society who came for a long weekend to look at the places where Aino Kallas lived in London as the wife of Oskar Kallas when he was the Estonian Envoy in London from 1922-34. The Krohn family has been of profound significance in the intellectual life of Finland. Aino Kallas was the daughter of the journalist and poet, Julius Krohn, and the sister of Kaarle and Helmi Krohn. Kaarle was a folklorist and professor of Finnish literature at Helsinki and Helmi was a translator, journalist and writer of biographies. She gave a talk to the Society in the 1920’s.

Dr Silja Vuorikuru , Chairman of the Aino Kallas Society,  gave a talk entitled “Aino Kallas: a Finnish-Estonian International Author” and Hilkka Oksama-Valtunen, Vice-Chairman of the Aino Kallas Society and herself a member of the Krohn Family,  delivered a Greeting from the Krohn Family. A short film was shown which included pictures of the Krohn family estate and information about the wine business established by the Krohns who settled in Madeira. The meeting was attended by the Ambassador of Finland and the Cultural Attache from the Estonian Embassy. 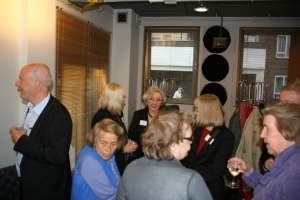 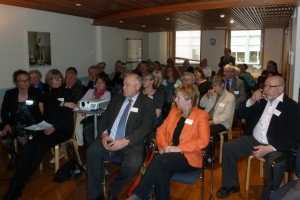 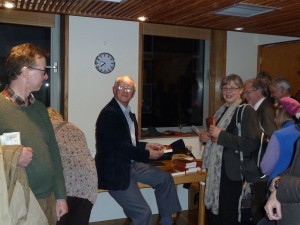 Tony Lurcock introduced his new collection of writing by British travellers to Finland, taking up where he left off his precious volume at 1830. He had selected 26 writers, some of whom were real travellers who endured hardships, but with the arrival of railways and steamers plying routes through the network of lakes, the later writers would be better described as early tourists. He entertained us with extracts from his book and his publisher, Charles Boyle, did brisk business after the talk selling copies of the book to the capacity audience which attended. For further details of the book click here.

Education for a Bilingual Nation

Soile Pietikäinen, who is a researcher and sociologist, spoke about the difficulties and challenges of bilingual education. She contrasted the growth of the Welsh language in Wales with the decline of Swedish in Finland. She provoked a very lively discussion with the capacity audience at the Finnish Institute.

Annual General Meeting held at the House of Lords

The Earl of Selborne was our sponsor for the AGM which was held for the first time at the House of Lords. The meeting was attended by 46 members of the Society. Ian Townsend had been nominated for election to the Council and was duly elected. After the formal business of the AGM there was a Reception in the Attlee Room.

Overview of Topical EU Issues from the Finnish Perspective

Mr Jukka Salovaara, Director General for the Department of Europe at the Finnish Ministry for Foreign Affairs, spoke to us about topical EU issues from the Finnish perspective. The meeting was hosted by the Ambassador at the Residence.