The Finnish Embassy in London – Yesterday , Today and Tomorrow

The Ambassador, H. E. Mr Pekka Huhtaniemi gave a talk at the Residence to about 45 members of the Society on the history of Finnish diplomatic representation in London. His talk was based in part on the research by Jussi Pekkarinen published in his book Maailmanluokan tarkkailupaikka (A World-Class Observation Post). Ten copies of the book were raffled to raise funds for the Society. As if that that was not a generous enough gesture on the part of the Ambassador, the evening ended with a splendid buffet dinner.

Remembering Finland in the 1950’s

This event attracted a capacity audience at the Finnish Institute to hear reminiscences from the veteran journalist and broadcaster, Katharine Whitehorn and retired businessman Chris Kaye of their experiences working in Finland in the 1950’s. Katharine Whitehorn worked as a “Teacher Secretary” recruited by the British Council to set up and run the British Club in Mikkeli in 1953/54. Her work involved teaching English and organising social activities. Chris Kaye worked for a timber company which did a lot of business with Finland. With little advance warning they sent him to Lappeenranta to learn Finnish. He entertained us with many highly amusing anecdotes of his experiences. The event, which had been enormously enjoyed by those who attended, had been arranged by Helena Henderson in her capacity as Programme Secretary. Sadly it was to be her last event as soon afterwards she became very ill and died on 6th December.

Anthony Dalby, Vice President of Brand Experience Design at Nokia, introduced the Nokia’s latest range of Lumia phones and explained how Nokia goes about designing a world class mobile phone and what is required to bring a competitive product to market. He showed a couple of films and we were able to handle samples and prototypes of the phones. The meeting was held at Nokia’s offices in Soho and afterwards a number of those who attended went for a meal at a nearby noodle restaurant.

The culmination of our centenary events was the Gala Dinner held on 22 May at the Grocers’ Hall in the presence of our Patrons, HRH The Duke of Edinburgh and the immediate past President of Finland, Mrs Tarja Halonen. The Duke made a witty speech, much appreciated by the guests, recalling his visits to Finland both at the time of the Olympic Games in 1952 and a later State Visit in 1976. Mrs Halonen expressed her appreciation for the work which the Society does to promote Finland and her pleasure at having served as its Patron and wished the Society well for its second 100 years. The dinner was attended by 128 members of the Society and their guests including representatives of Nokia and Suomi Seura which had both provided sponsorship during the year. Particular thanks are also due to Chris Kaye whose membership of the Grocers’ Company enabled us to have the event at their Hall and to Paola Killinen who worked with Chris on the time-consuming practicalities. 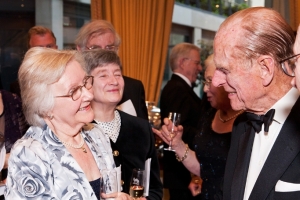 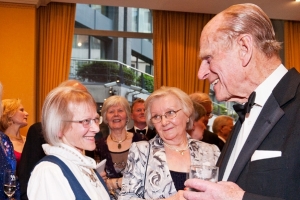 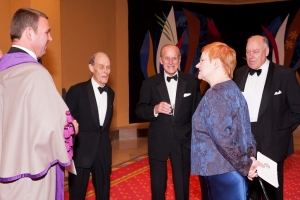 About 50 members of the Society and their friends attended a private view of the Exhibition which we arranged at Burgh House Hampstead of works by Hugo Simberg taken from the collection of his granddaughter, Ann Simberg Saunders. On the afternoon of Sunday 22 April the mezzo soprano, Essi Luttinen, gave a recital of songs by Sibelius accompanied by the pianist, Roope Gröndahl. Edward Clark, President of the UK Sibelius Society introduced the songs. In cvarious ways we received sponsorship for these events from the Embassy, Suomi Seura and SAS.

Reflections on the Helsinki Olympics of 1952

There was a full house at the Residence for those event which looked back 60 years to the Olympics in Helsinki and looked forward to the forthcoming London Olympics. HRH The Duke of Kent, who as a young man had attended the Helsinki Olympics with HRH The Duke of Edinburgh was present. Prof. Juhana Aunesluoma gave a talk on the cultural and political significance for Finland in hosting the Olympics at that time and we also fortunate enough that five athletes, Hannu Posti, Frank Sando, John Disley, Sylvia Cheeseman and Lord (Terence) Higgins, were present and we able to share their reminiscences of the Games.

AGM with readings from the Kalevala

We held our AGM at the University Women’s Club. After the formal business of the AGM, Keith Bosley gave a short talk on the Kalevala and then read some extracts from his translation which his wife, Satu Salo, then read in the original. The evening ended with canapés and drinks.

Contrasting Finland in 1911 with the Finland of today

One of the earliest ideas for celebrating our centenary was to have a talk contrasting the position of Finland as it was when the Society was founded in 1911 with its current position. Our speaker was Prof Martti Häikiö who is particularly well-known for his histories of Finnish companies, including Alko and Nokia, but he has also written about Finland in British politics 1939-1940 and he has written a major biography of the Finnish national poet and academician, V.A. Koskenniemi.