Dr Terry Charman, Senior Historian at the Imperial War Museum, attracted a capacity audience for a  most informative talk on the background events which led to Britain declaring war on Finland.

Shortly before she left London for a new life in Australia, Sini Kiialainen, the Chef at the Finnish Embassy gave us a talk about he book Kuura and her experiences of having worked in London both in commercial kitchens and at the Embassy. There were plenty of questions from the audience and also the pleasure of a last opportunity to sample some of her excellent canapes. Members participating in a radio drama 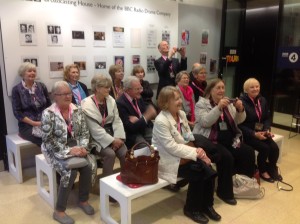 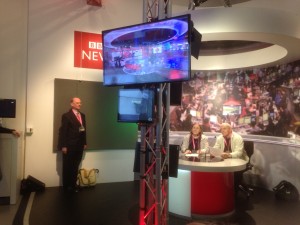 We were just two participants short of the maximum number for a tour of BBC Broadcasting House and it proved to be an extremely interesting and worthwhile event. Our guides were knowledgeable and dealt efficiently with our questions. We were able to look down on the television news room from a gallery while one of the guides explained how news is gathered and presented. Volunteers were coerced into reading a mock news and weather presentation while the others watched the performance on a monitor. There was also the chance for a larger group to read the script and make sound effects for a radio drama.

This was an evening to remember the late Professor W R Mead who had been instrumental in the revival of the Society after its closure during the war and who had played such an important role in the Society over a period of more than 50 years. Paulus Thomson began by reading the tribute which Bill Willett had delivered at the funeral. He then read extracts from some of Bill’s books to show something of the range of his interests and the quality of his writing. There was also time for personal memories from those in the audience ranging from the early 1950’s to within the last year. 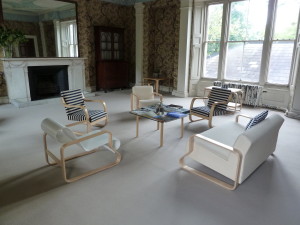 Furniture designed by Alvar Aalto on display at Pitzhanger Manor

A small but enthusiastic group of members gathered at Pitzhanger Manor House and Gallery to see the exhibition of furniture, lighting and glass by Alvar Aalto and architectural photographs by Ola Kolehmainen. The exhibition was curated by Dr Susanna Pettersson, Director of the Finnish Institute, and she was our knowledgeable and insightful guide. 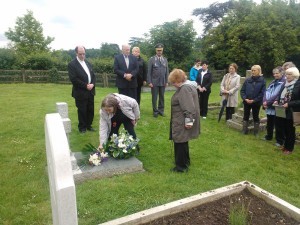 Marjatta Bell laying flowers on the grave of Anastasie Mannerheim 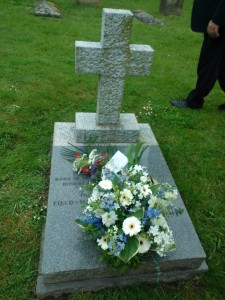 The grave of Anastasie Mannerheim

Following on from Mertsi Fisher’s talk about the life of Anastasie Mannerheim members had the opportunity to visit the churchyard at Norton in the company of the Ambassador, H. E. Mr Pekka Huhtaniemi and the Military Attaché, Col. Simo Hautala, when flowers were laid on Anastasie’s grave. The Rev John Weir said a prayer and sang the Russian Kontakion for the Departed. We then travelled the short distance to Provender House where we were given a tour by Princess Olga Romanoff. The house has a long history and is of great interest to historians of English domestic architecture as there are undisturbed parts from several centuries. The house has had Finnish connections since it was rented in 1890 by Emil Borgström, Princess Olga’s great-grandfather. You can learn more about Provender by visiting the Provender House website.

The Life of Anastasie Mannerheim

We held this meeting at the London School of Pharmacy and Mertsi Fisher’s talk on the enigmatic life of Anastasie Mannerheim attracted about 45 people, a few more than the room could comfortably accommodate. Information about Anastasie’s life is rather scanty, but Mertsi Fisher managed to put together a coherent account in a very interesting and well-presented manner.

St Mark’s Church, Hamilton Terrace NW8 was the venue for our spring convert arranged jointly with the UK Sibelius Society. The performers were Satu Jalas, playing the violin given to her by Jean Sibelius, and the pianist, Folke Gräsbeck. They played works by Sibelius, Respighi and Grieg to an audience of a little over 200. The concert was generously supported by SEB and Suomi Seura.

The Annual General Meeting of the Society was held at the offices of the European Commission Representation in London. The Deputy Head of Representation and Head of the Political Department, Christine Dalby, welcomed us and gave an introduction to the work of the Commission. After the formal business, there was a chance to socialise before the Ambassador arrived direct from having attended a meeting in Rome and delivered a talk on Finland’s EU policy. The text of his talk can be downloaded here (.docx). We are grateful to Europe House for allowing us to hold the meeting at their offices and to Monica Prebble for the excellence of the catering which combined some Finnish favourites with the more traditional international items.

The Åland Islands – Past Present and Future 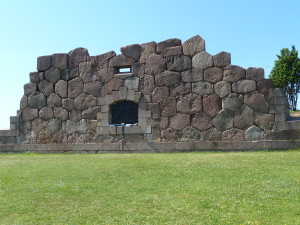 Part of the ruins of Bomarsund 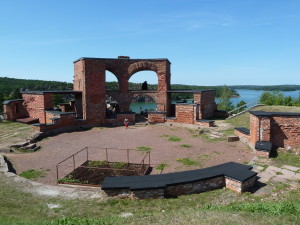 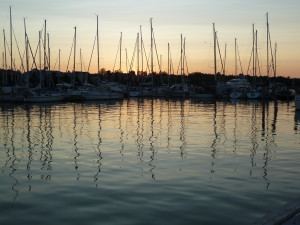 The Finnish Church in London was our venue for a talk by Hanna Hagmark-Cooper, Director of the Åland Maritime Museum, entitled “The Åland Islands – Past, Present and Future”. She provided us with a thorough overview of the history of the Islands, their relationships with Finland and Sweden, the delights available for tourists and the challenges they bring in their wake.

Who was Edward Westermarck? 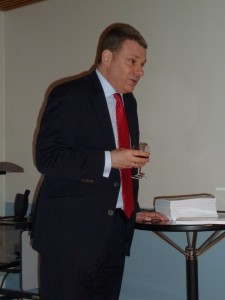 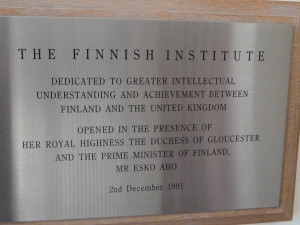 Dr David Shankland, Director of the Royal Anthropological Institute, gave a talk entitled “Who was Edward Westermarck”. The talk marked the publication of the papers that had been given at the international seminar which the Society arranged in December 2011 as part of its centenary celebrations. The book was published as an occasional paper by the RAI and was the first book in English to have been published on Westermarck’s work. Dr Shankland’s talk touched on the whole range of Westermarck’s work and achievements and made a compelling case for the reversal of the neglect of Westermarck’s reputation.
The meeting was the last that we were able to hold at the premises of the Finnish Institute in Eagle Street before their move to new offices in King’s Cross which have only limited space for meetings. Eagle Street had been the base for our meetings ever since the Institute had been established there in 1991. Over the years we have enjoyed the support of the Directors of the Institute and many members of its staff for which we have been most grateful.

Those peculiar Finns – did they really come from Asia?

Marjo-Riitta Järvelin, Professor of Lifecourse Epidemiology at Imperial College, London, spoke to us about the origins of the Finnish people as evidenced by archaeology, linguistics and genetics. Current research does not support what has been traditionally taught, that the Finns came from somewhere beyond the Urals; they seem to have come from all directions but they are genetically quite distinct from their neighbours.