To mark our thanks for her many years on the Council, latterly as Vice Chair, Arna Davis was the guest of honour when we returned to Lisa’s Kitchen and Bar for a Scandinavian style meal.

Strong Finnish Women and their Influence on Finland’s Independence

Riitta Jallinoja, Professor Emerita in Sociology at Helsinki University, spoke about a number of influential women and also provided interesting information about the development of women’s organisations in Finland. The event took place at the Finnish Institute and attracted a reasonable crowd.

A Century of Political and Trading Links between Finland and Britain

This was a full day celebration conference jointly organised by the Anglo-Finnish Society and the Finnish-British Chamber of Commerce. The impressive line-up of Finnish and British speakers, including the Governor of the Bank of Finland and three London Lord Mayors, attracted almost 200 people to the  European Bank for Reconstruction and Development in the City of London. It  was part of the official Suomi 100 celebrations in Britain and received a generous grant from Finnish government funds.

Credit for the original idea to arrange  a conference on a centenary of Finnish and British interaction must be given to Marjatta Bell. She  acted as the indefatigable project manager leading the planning team, devising the programme, engaging all speakers from Finland and securing grants not only from Finnish government funds but also from Niilo Helander Foundation and from Suomi-Seura.  Patrick Salmon secured a major sponsorship from  BAE Systems.  Jura Junnila and his team at the Finnish-British Chamber of Commerce secured the sumptuous venue and sponsorships from Nokia and Basware as well as speakers dealing with current trading links. The expertise of FBCC was  also vital in employing IT facilities for publicising the event and registering participants. Clive Suckling, a former head of PwC’s Global Forest Industries practice,  assembled the panel of timber trade veterans;   Hely Abbondati, a former Chair of the Finnish-British Trade Guild and the first General Manager of the FBCC, acted as a general advisor and provided contacts to potential speakers and participants. Paola Killinen was responsible for overseeing the catering arrangements and liaising with the EBRD in connection with the practical  arrangements for the smooth running of  the conference.  Pekka Isosomppi and Minttu Taajamo from the Finnish Embassy helped with many technicalities and provided rooms for the planning meetings.

By general consensus the conference was a tremendous success, for some even  the highlight of Finland’s centenary year in  Britain. The conference and the Society were mentioned  in Helsingin Sanomat before the event and reported afterwards in Kauppalehti and Ulkopolitiikka.

Strong Finnish Women and their Influence on Finland’s Independence

Riitta Jallinoja, Professor Emerita in Sociology at Helsinki University, spoke about a number of influential women and also provided interesting information about the development of women’s organisations in Finland. The event took place at the Finnish Institute and attracted a reasonable crowd.

To mark the 150th anniversary of the birth of Marshal Mannerheim,  Tony Lurcock gave a particularly interesting and well-researched talk. It  sparked an exceptionally lively discussion about Mannerheim’s role in  Finnish history in general. The event was held at Senate House,  University of London.

The AGM followed by a talk on “Art and Finnish Nationalism”

After the formal AGM business, Arna Davis, who had stood down as Vice Chair of the Society at the AGM, gave an illustrated talk in which she spoke about the professional development of Finnish art after Finland’s separation from Sweden in 1809, and the role which visual arts played at the end of the 19th Century bolstering Finnish nationalism and the reinforcement of Finnish identity. The event was held at the Finnish Church and to celebrate the centenary year the Society met the cost of the supper and drinks.

It was a sunny afternoon when the Ambassador unveiled the plaque at 28 Kensington Gate where Tancred Borenius had lived from 1936. He was the first professor in the History of Art at London University and a long-standing Council member of the Society.

The plaque and the seminar which followed were the culmination of two years of negotiations by the Hon. Secretary, Paulus Thomson. Early feasibility discussions were held with Dr JHohanna Vakkari, then at the Finish Institute, and Mrs Kerstin Lindman-Strafford, the biographer of Borenius. Consents for the erection of the plaque had to be obtained from the building owners and the local planning authority. The seminar was generously hosted by the Ambassador at her Residence and it was attended by about 50 people. There were presentations by eight speakers who covered topics ranging from Borenius’s early life, his career as an academic and prolific contributor to art magazines and even his possible role in a secret peace mission to Geneva in 1941.

In anticipation of the above events, the art historian Robert O’Byrne wrote an article for Apollo entitled “He helped to set the standard for Apollo“. The Royal Borough of Kensington and Chelsea gave the Society a grant of £250 towards the cost of the plaque.

The Curious Case of the Finnish Language

A talk by Marjatta Bell on why the Finnish language survived despite Finland having been ruled by Sweden for 600 years and then by Russia for another century. She also told how Finnish was systematically developed from the 1830s so that by the 1880s it was fit for use not only in administration but all levels of education and culture and she gave some examples of current trends in the Finnish language. Some 30 people attended at St Giles International.

Where the Bear Sleeps

On Kalevala Day the storyteller Nick Hennessey gave a performance of his show Where the Bear Sleeps in which he told the creation myths from the Kalevala and the story of the smith, Ilmarinen. He gave an enthralling performance at the Finnish Church and it was a pity that there was not a bigger audience to enjoy it.

We began the year with a reception at the London Library to mark the donation of 100 books from Finland. The event was reported by the Library in its newsletter as follows:

100 BOOKS FOR 100 YEARS OF FINNISH INDEPENDENCE! 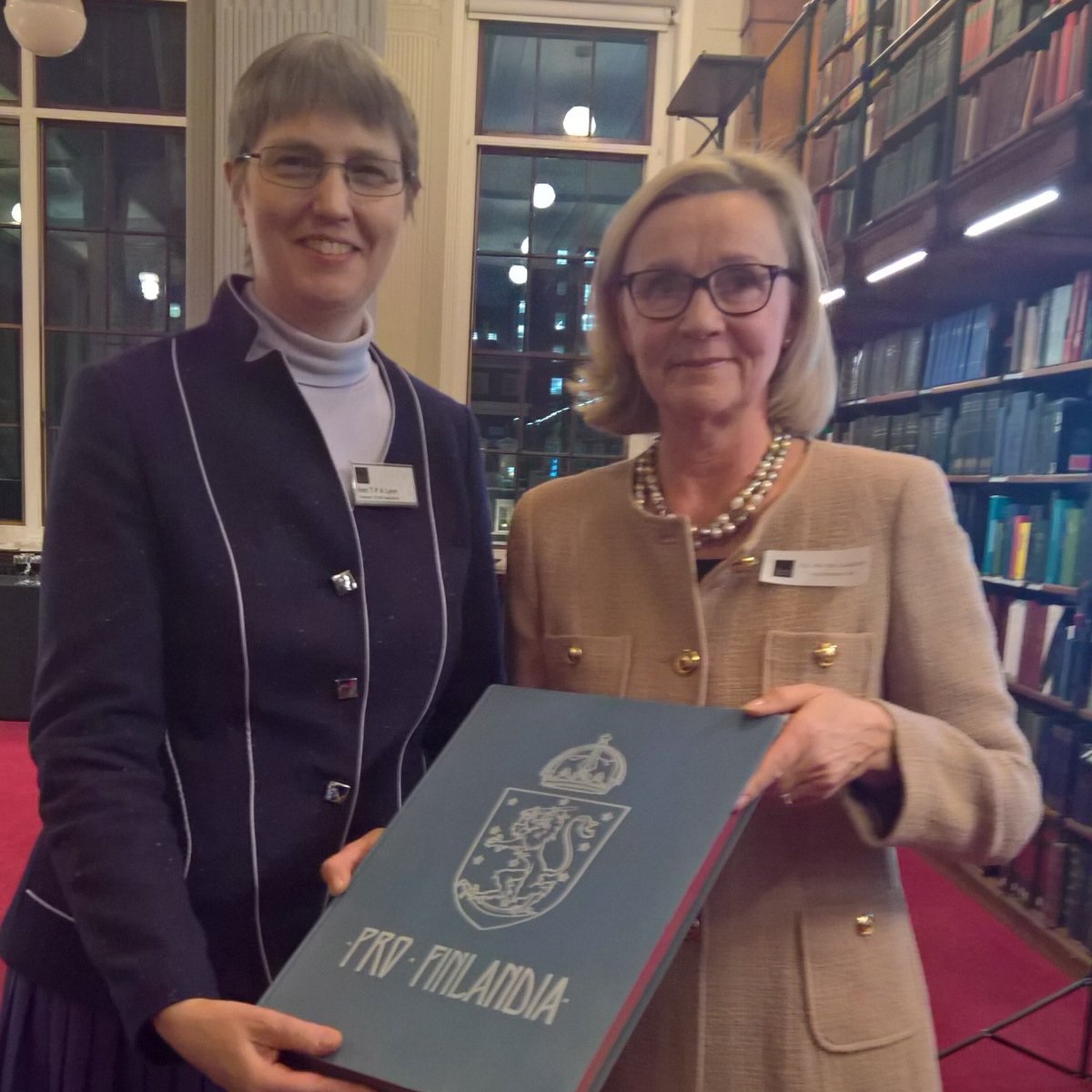 Attended by Päivi Luostarinen, Finland’s Ambassador to the UK, this was the first official UK event in the Finland 100 programme (Suomi Finland 100) that will culminate on Finland Day, 6th December 2017 – the 100th anniversary of independence.

At the heart of last night’s event was the donation of an important collection of over 100 contemporary Finnish books that has been made to the Library through the Anglo-Finnish Society. The donation recognises the Library’s historical importance as a home of European and international literature (its shelves carry thousands of books in 25 different languages) and is an important modern addition to its existing Finnish collection, which includes the first New Testament printed in Finnish (dating from 1548), of which only 70 copies were ever made.

The Library built up its Finnish collection up to the Second World War, but its development since had been much more sporadic. The donation of over 100 new books through the Anglo-Finnish Society brings the collection up to date and its impressive range is a fitting reminder of the vibrancy of Finnish cultural life.

Over recent weeks, the new Finnish books have been catalogued and bound, and marked with the Library’s striking 175th anniversary labels. Featuring a wide range of topics – including Finnish Art, Architecture, History, Fiction and Topography – the books will shortly be available on the Library’s shelves for borrowing. Each carries an acknowledgement of Suomi 100 on the inside cover and a list at the back of the benefactors involved.*

Following a fascinating talk on Finland by Professor Henrik Meinander, an opening address by Sir Paul Lever, President of the Anglo-Finnish Society the collection was formally handed to Inez Lynn, Librarian at The London Library. Inez Lynn commented “We are extremely grateful to the Anglo-Finnish Society and the generous donors who have made this important gift possible.  The new books are a wonderful showcase of Finnish culture and the opportunity to grow our Finnish collection is a lasting way of celebrating this centenary year.” 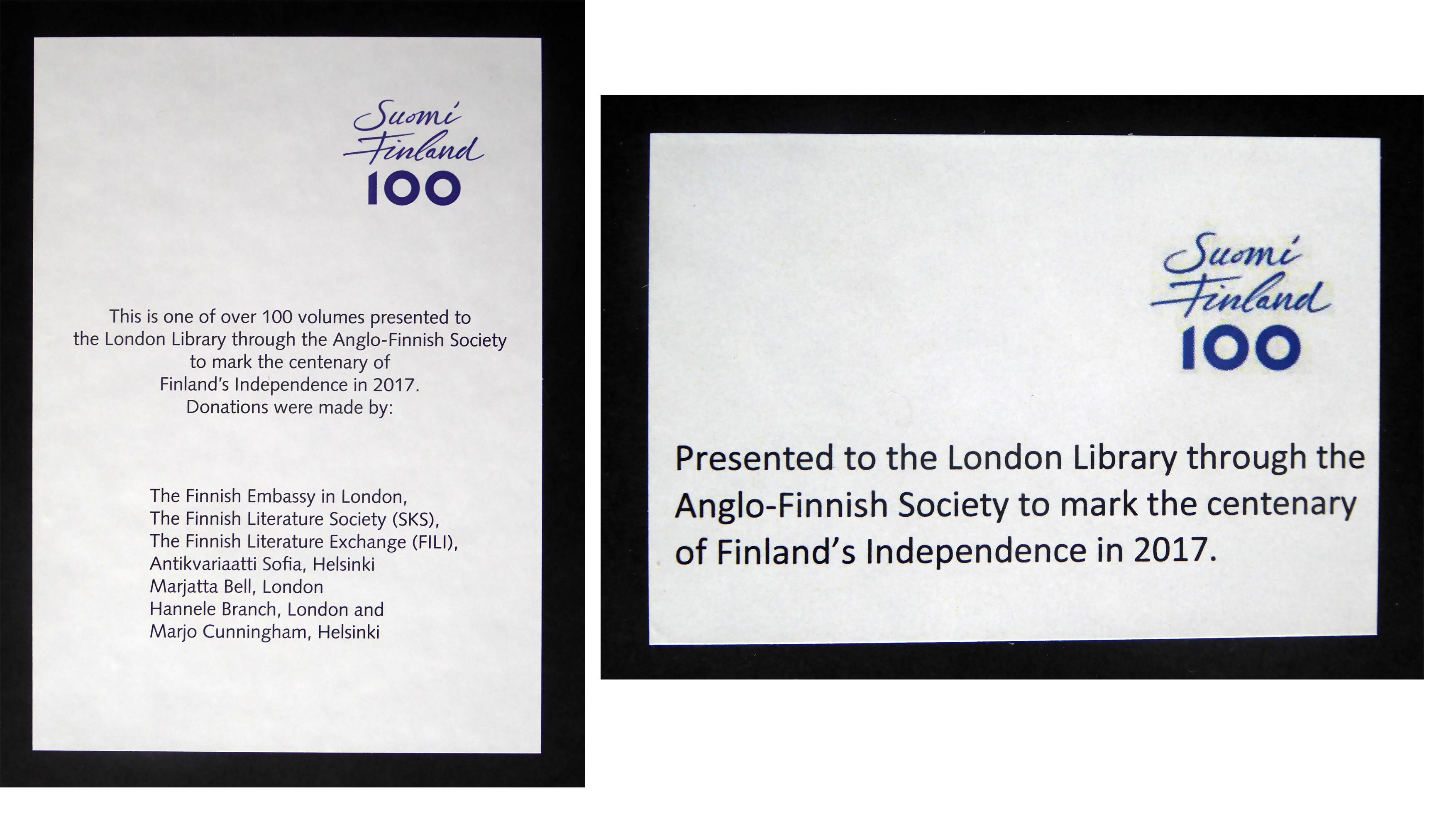